As mentioned in the Decision page we finally picked up a 2001 Holden Jackaroo SE Turbo Diesel at Christmas 2012.  The Jackaroo was not a vehicle on my radar when I started looking but found some interesting information when I came across a couple and did some online research.  The negatives only related to one issue with this vehicle,  and that is what happens if owners do not follow correct maintenance procedure relative to the engine oil and servicing needs of this particular engine.  The J4X1 is a complex 3 litre 4 cyl. twin ohc turbo diesel using technology licensed from Caterpillar and is often referred to as “the one with the CAT engine”.  This technology uses engine oil to lubricate the fuel injection system via a secondary oil pump and second oil filter arrangement; this results in both the need for very light grade,oils (typically 5W-30 or maximum 10W-40) and regular change of engine oil at 5,000km, primary filter at 10,000km and secondary filter at 20,000km (These are not official Holden figures but drawn from previous/present owners including the previous owner of ours).

After this singular negative issue, which if not looked after can result in severe injector damage and engine failure to even start, I found much positive comment especially relating to performance and operating costs, fuel economy etc.   One Press comment I found published in recent times says  “Lurking up the back of many a car yard is a long forgotten proper 4WD that is equally as capable and as well built as either the Prado or Pajero, but guaranteed to cost you thousands less.”

Earlier 4WD vehicles with auto trans often had shift problems when towing but one journo writes : “A series of upgrades culminated with a major facelift (of the Jackaroo)  in 1999, which brought new petrol and diesel power, the latter of which became renowned for setting the standard with modern diesel/auto 4WDs……The 3.0TD offered from 1999 was a revolutionary engine for several reasons. Not only was it the first truly desirable automatic diesel 4WD, it introduced a raft of new technologies….The sheer power and driveability of this engine far outweighs (any) higher servicing costs.” 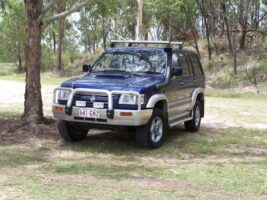 This all convinced me to go ahead and buy and so far, although only a few thousand ks, all is as expected.  When purchased our Jack had just done 200k and had been fully serviced with the required timing belt/tensioner and even water pump changed; this is a 200k requirement, not every 100k like most others.  After taking the vehicle for an RACQ check (the best $200 I have ever spent buying a car!) the seller agreed to replace all four disc rotors and pads, the windscreen and a couple of rear suspension bushes; tyres were at 60%+ so no major costs were anticipated.  So far we have had a starter motor failure but our local mechanic in Ipswich put a low mileage secondhand unit in for $350 all up.

As you can see from the pics the best part of the deal was all the extras (and spares) included in the price; there is an alloy bullbar (airbag approved), side steps, snorkel, H-R towbar (2500kg rated), roof bars, tinted windows, electric brake controller, Anderson Plug with Redarc isolator, and CB Radio.  Also provided was a box of parts including a set of wheel bearings, CV Joints and boots, Disc pads, hoses, belts, 3 Oil Filters, 3 Secondary Oil Filters, 3 Fuel Filters, and the original water pump (plus a sixth tyre at the same wear level as the rest).  All this for ten grand 🙂

Finding and buying a van took a little longer and a lot more deliberation; this is what we have to live in every day for who knows how many years?  While working on the house to ready it for sale we went through the whole swing from used to new and back again; as newer vans were appearing in the sub $50k category you get sucked into the vortex of thinking that new might not cost as much as you think but when you start adding options and getting more serious about facilities and specifications the prices soon start to rise and you find you are soon in the mid $60k range, even with show discounts.  Maybe we wanted too much but at least we were finally getting a real idea of what we did want in our final home on wheels

Being 20 years since our last caravan many things had changed, mostly in technology (Electric Brakes universally used, full 12 volt battery systems) and commonly fitted features (led lighting, radio and TV) and there are now lots of options (like diesel heaters and solar power) as well as so many accessories and add-ons it becomes quite mind blowing.

Having listed the absolute “must-haves” we then started listing the “desirables” and the “nice to have extras”; this was put into a spreadsheet with potential suppliers and prices.  The main criteria were to fit into the 2500kg max weight, shower and toilet, r/c aircon, not too long (for better handling), independent suspension (for better gravel road performance, especially on corrugations).  The independent Suspension rules out a lot of vans but I considered it essential having done tens of thousands of ks on outback roads, in trucks and cars, during my time in the farm equipment industry (76 to 83). 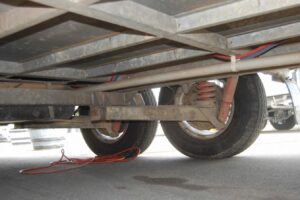 sharing system is truly independent.  In the end the 2000 model Windsor van that we found has the best form of this in the use of a separate trailing arm per wheel with coil spring and shock absorber; Windsor seemed to have made very little effort to promote this when these vans were new compared with the promotion used today by some manufacturers, and considering that this was quite advanced in a Touring Van in 2000. 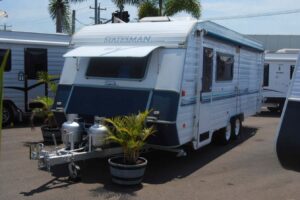 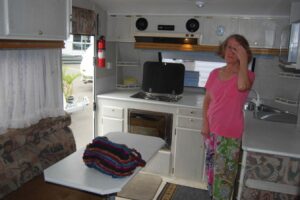 Windsor vans then were made by the original family company using a Preston Chassis (Windsor is now part of the Fleetwood group – Coromal, Camec etc.); the Statesman Royale was their flagship van of the time with several variations in interior layout but mostly the same overall at 19′ 6″ in body length.  Our particular variant has front Kitchen and rear (separate) shower and toilet with wardrobe between; double bed is east-west with a pull out frame and fold over mattress to allow more pass through walk space at the foot.  The real bonus of this layout is the front kitchen with enormous amounts of bench space and storage as well as a second 2 seater lounge opposite the L shape dinette.  The only compromise in this is the smaller (100L) fridge compared with the current trend to fit the 2 door 185L model in most new fully equipped vans.

General Interior Views (Now while on the road): 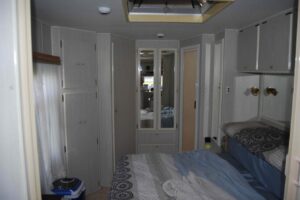 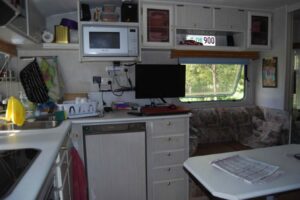 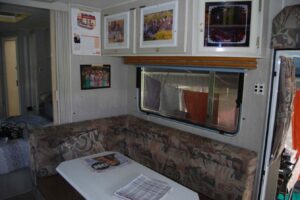 As advertised this van was $29,990 (reduced to clear stock by about $3k) and we had the dealer fit a Digital Jack tv antenna and also supply the WDH making the whole deal arounf $31.5k, about half what we would have spent on a new van as a minimum.

Our report on “Preparation” discusses what we have done to both the “tug” and the van for our own comfort and convenience.